40+ User Votes to help you to find the best Honda Bikes In India. Honda CB Unicorn 160 – The Honda CB Unicorn 160 is a premium 160cc motorcycle targeted at young riders looking for a stylish commuter motorcycle for use on a daily basis. Honda was displayed the updated Unicorn 160 at the 13th Auto Expo. It is full of muscular motorcycles and good looking such as fuel tank gets a muscular design while the headlamp gets a bikini fairing. It is being offered in two variants – Standard and CBS. Honda CB Unicorn 160 comes equipped with 162.71cc single cylinder, air-cooled engine with Honda Eco Technology (HET). It is mated to 5-speed manual transmission and set to reach at top speed of 106 kmph. Honda CB Unicorn 150 – The Honda CB Unicorn is one of the most popular and efficient 150cc sports commuter motorcycle among others of this segment. It was discontinued but high demand of this bike forced Honda to bring this back recently. In term of design it has good look such as 3D emblem of Honda on its big fuel tank looks classy with new graphics on its side panels, new visor features chrome finish just above its headlight which adds premium touch to this bike, full size rear fender and tail light which adds muscularity to this bike with clear lens indicators.

Honda CB Twister (Discontinued) – The 110cc Honda CB Twister gives you the great mileage and is highly affordable like any 110cc bike. But it comes with incredible stylish looks which stands out unlike any other 110cc bikes .The bike has the screen less front cowl with combinatory instrument panel and muscular tank to enhance the aesthetics of the bike. The powerful cutting edge 110cc, 9bhp engine gives you the smooth ride with a mileage of 70kmpl. 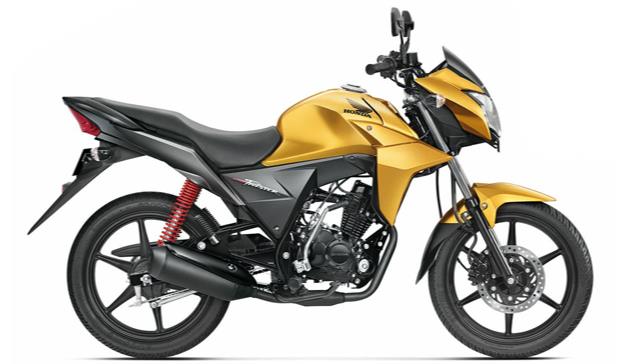 Honda CB Shine – Honda Shine is famous for its comfortable ride, fuel efficiency and is specially developed for Indian road conditions. It runs on a 124.7cc engine, air cooled, 4 stroke, SI engine that ensure excellent power at all speeds. Te bike delivers the best balance of mileage and pickup in 125cc bike category.

Honda CD 110 Dream – The new Honda CD 110 Dream is the most affordable model among Honda’s Dream series of commuter motorcycles powered by an 110cc, single-cylinder engine that produces 8.25bhp of power and 8.63nm of torque comes with four-speed gearbox and also available with the Honda Eco Technology or HET which helps improve fuel efficiency. It returns a claimed fuel efficiency of 74kmpl and offers a long saddle, stylish graphics, silver tone alloy wheels and a metre console. Both front and rear braking with 130 mm drum brakes. Honda Dream Yuga – Honda dream Yuga is most expensive commuter bike of Honda's dream series. It has new colour schemes and more interesting to attract young Indian customers. This bike is powered by 109cc single cylinder air-cooled engine which gives out 8.25bhp at 7500rpm and 8.63Nm of torque and is mated to four-speed constant mesh gearbox. It has telescopic suspension in the front and five step spring loaded suspension at the rear. Honda CBR1000RR Fireblade – Honda CBR1000RR Fireblade is one of the most powerful, most prestigious bike of Honda in its CBR series and known in some countries as the Fireblade. Every part of this machine seems to be roaring for power and speed. Honda CBR1000RR looks glorious from every angle. Fireblade features combined ABS and powerful twin headlights for safety. Honda has done almost everything, what it takes to make an appealing sports bike. The engine is mated with a six-speed gearbox with one gear down and five gears up-shift pattern. This bike does 0-100km/hr within three seconds and can cross the speed of 200km/hr without much effort. Honda CB Shine SP – The Honda CB Shine SP is an updated model of existing motorcycle CB Shine, which uses the same 125cc engine but has a five-speed gearbox. It has completely different design with sporty touches around its body mainly focused on people who always want good performance bikes with better fuel efficiency, quality and reliability. It is powered by 124.7cc, single-cylinder, four-stroke, air-cooled motor with Honda Eco Technology. Honda VT 1300CX Fury (Discontinued) – One and only factory made chopper was available in India is Honda VT fury. It is a classical looking chopper from all ends it is long, has clean lines, has curves at right sides, lean mean looking fuel tank , low slung seats and chrome is used in right amount on it. The Fury stays true to the chopper template with its long handlebar extending far back to the rider. Switch gear includes basic an engine-kill switch, starter button, horn and also the headlight and turn signal controls. It comes with a 1,312cc liquid-cooled 52-degree V-twin engine. Honda Goldwing GL 1800 ( Ranked#10 in all listed; 5% votes, Total: 45 votes)*
Honda Gold Wing GL1800  – Honda first launched Gold Wing in 1975 a touring bike now with time the bike has become the epitome of touring bikes all around the world. Gold wing describes what touring bikes should be. It offers the riders a unique luxurious, powerful, balanced and fully featured machine ready for every journey.  It comes with whole lots of luxurious features like six-speaker 80W SRS surround-sound system with USB, iphone and ipod connectivity, electric cruise control, heated grips, heated seats, foot worming systems and luggage capacity of 150 liters. for such a beast it is loaded with safety features like the Gold Wing comes fitted with Combined Braking System (CBS) and Anti-lock Braking System (ABS) and fully-integrated airbag.  Gold wing comes with a 1832cc Liquid-Cooled, 4-Stroke, 12-Valve SOHC Flat-6 which produces 116bhp of power and 167Nm of torque. The engine is mated with a 5 speed gear box. Honda CBF Stunner (Discontinued) – Honda Stunner is known for its fuel efficiency. It runs on a 125cc engine with 11 bhp of power which is mated with 5 Speed transmission with newly constructed Tachometer that ensure excellent power at all speeds. It provides mileage around 60+ kmpl, has better stability and control. The bike is extremely smooth and low maintenance vehicle and a hassle free ride. The bike is available in sporty look. Honda CBR650F – The Honda CBR650F is a middleweight sport touring motorcycle of Honda CBR series manufactured by Honda Motorcycle and Scooter India. The bike looks like any other bike of its class, with a full-fairing, a compact frontal area, a slim rear, six-spoke alloy wheels, HRC-inspired paint scheme with red, white and blue tri-colour paint and a pronounced tank. The CBR650F come with electronic twin pod instrument cluster which displays a speedometer, bar tachometer, dual trip meters, fuel gauge and a clock. It also comes with an electronic anti-theft device called Honda Ignition Security System (HISS).

Honda X-Blade (Upcoming) – Honda Motorcycle and Scooter India (HMSI) unveiled the new X-Blade at the Auto Expo 2018 in India. The Honda X-Blade is a 160cc offering from Honda in the sporty commuter bike segment. The overall design of the X-Blade is similar to the Hornet 160R, but the X-Blade comes with premium features which set it apart from the crowd in the 160cc segment. The bike is powered by a 162.7 cc single-cylinder, air-cooled engine that produce 13.6 bhp at 8500 rpm and 13.9 Nm of peak torque at 6000 rpm. The engine is mated to a five-speed gearbox. The X-Blade has been positioned in a way to attract youngsters and for this purpose, it has adopted a very aggressive design language. Honda Livo – Honda Livo is a commuter motorcycle comes with more sporty design and much higher price compared to other bikes in the segment and basically targeted to the rural customers who need a stylish commuter motorcycle, which have good fuel efficiency. The bike comes equipped with 109.19 cc engine produces 8.2 bhp at 7500 rpm and 8.63 nm at 5500 rpm, a 4-speed manual transmission. The fuel tank capacity is 8.5 litres, weights around 111 kg, company claimed mileage of 74 kmpl and available in variants, one with disc brake and 2nd is without disc brake. 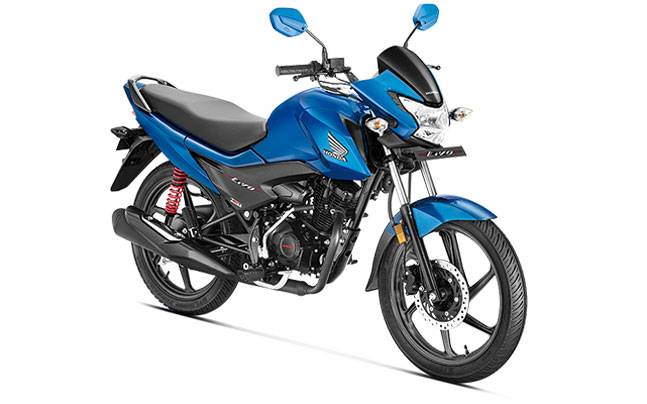 Honda CB1000R – The naked superbike from Honda, the CB1000R, was launched in India in 2009 with a 1000cc Fireblade engine. It has good attractive looks with the help of black coloured engine and aluminium wheels with disc plates, macho fuel tank, LED tail light, extended rear fender and quite fatty tyre at the back and black coloured rear view mirrors are mounted on its handle bar. Another highlight of the bike is the H.I.S.S. security system. It is powered by 998cc, liquid-cooled, four stroke engine mated to a six-speed gearbox.It can reach easily 0-100 kmph in just 4 sec. with Top Speed of 225 kmph. Honda Dream Neo – Honda have launched another 110cc commuter bike known as Dream Neo, is the most affordable motorcycle in Honda India’s range. The bike looks very similar to the Dream Yuga, only the graphics are different like sporty graphics on its fuel tank and side panels which make its look attractive. It is powered by a 110cc engine which deliver power of 8.25bhp and 8.63nm of torque and comes with four-speed gearbox (all-up pattern) and has drum brakes both at the front and rear. Honda Africa Twin – The Honda Africa Twin is a most awaited unlimited adventure bike form the Honda. In addition to the manual-transmission model, another version is available with as Honda's unique Automatic Dual Clutch Transmission. Both versions feature switchable rear ABS and multiple mode Honda Selectable Torque Control (HSTC). Traction control has four settings, off and levels 1-3. Level 1 is the most aggressive while level 3 is easy on the rider. The Africa Twin is powered a 998cc parallel-twin liquid-cooled engine puts out 86 Bhp at 7500 rpm and 92 Nm at 6000 rpm through a six-speed dual clutch transmission (DCT). Honda CB Hornet 160R – Honda Motorcycle and Scooter India has launched its much-awaited 160cc bike the Honda CB Hornet 160R which is made available in two trims- Single Disc and Dual Disc with CBS. It is the good looking bike in its segment with its macho look, which is achieved by bulky body panels, especially the fuel tank. It comes equipped with 162.71cc, single-cylinder, air-cooled 4-stroke SI engine with Honda Eco Technology (HET) that comes linked to 5-speed gearbox and generates a maximum power of 15.66 bhp at 8500 rpm along with a peak torque of 14.76 nm at 6500 rpm. Honda CBR150R (Discontinued) – The Honda CBR150R is an 150 cc light weight sports bikes of CBR series manufactured by Honda. Now the new updated Honda CBR 150R is available in markets, bike remains the same mechanically but features some cosmetic updates and ntroduced with the aim to serve the young generation. It carries most of the looks of its elder sibling, CBR250R. It has the same Y shaped crystal clear headlight, visor and rear view mirrors similar to that of CBR250R. It is loaded by 149.4cc, liquid cooled, four-stroke, SI engine that comes mated to a six-speed transmission system. It uses a Programmed Fuel Injection System (PGM-Fi) that delivers an enhanced fuel economy. Honda CB500X (Upcoming) – The launching date of the bike is not announced yet. It will be available in two variants STD and ABS. Honda VFR1200F (Discontinued) – The only real sports TOURING from Honda in India is a VFR1200F. The bike comes with color matching saddle bags with 29 liters of storage capacity per bag and one boot saddle bag. It runs on 1237 liquid cool v4 engine which produces horsepower in the 167 HP range at 10,000 RPM and max torque is 95.1 ft-lbs at 8,750 RPM. Bike comes with two riding modes D which is a regular driving mode and the other is the S which is sports mode. It is only available in red color.