The Chinese manufacturer CFMoto that has tied up with Bangalore-based AMW Motorcycles is set to launch four motorcycles in India on 04 July 2019. The motorcycles will be brought to India via the CKD route and be assembled at CF Moto’s Bangalore plant. The CFMoto company is planning to make a big splash in the Indian two wheeler market from day one. CFMoto 650GT is the mid-capacity sports tourer motorcycle from CFMoto. The sport tourer features the LED headlamps, LED turn indicators and LED tail lamp a digital screen. A sports tourer is more of a sportbike which you can comfortably tour on. 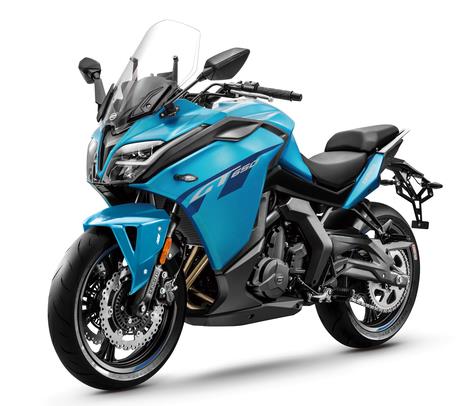 CFMoto 650GT is powered by a 649.3 cc, liquid cooled, 2-cylinder inline, 4-stroke engine puts out 62.54 Ps of maximum power at 9000 rpm and 58.5 Nm of peak torque at 7000 rpm. The engine is mated to a six-speed transmission. The bike is equipped with a cantilever type at the front and a retractable type at the rear. The CFMoto 650MT has been equipped with a dual-channel ABS unit as per the new safety regulations.

It is an adventure touring bike that features a twin-pod headlamp, adjustable windscreen, underside exhaust and a stepped seat. CFMoto 650GT come with LED headlamps, LED turn indicators and LED tail lamp and the large digital screen. A dual channel ABS Anti-Lock Braking System (ABS) will be on offer as standard for added safety and convenience.