TATA is a well known company for heavy machines and Vehicles like Trucks, Buses, MPVs, But this time the company is all set to launch their another new premium hatchback car for the Tata cars lovers the name Altroz in sometime in 2019. The upcoming Altroz will be Tata Motors’ largest and most premium hatchback. Previewed by the sleek 45X concept at Auto Expo 2018 and shown in final production form at the 2019 Geneva motor show, the Tata Altroz may launch in India in August 2019. The Altroz is the first of the new models to be built on Tata’s all-new ALFA (Agile Light Flexible Advanced) platform. Since then, the car has been spotted testing on several occasions on the streets with heavy disguise. In the same set, a few more photos of the hatchback have been snapped recently. The slightly visible taillights in the spy shots seem to be identical to the car that was showcased earlier this year. The Altroz carries on with Impact 2.0 design philosophy that debuted on the Harrier. It aims at reinventing the urban car design with greater emphasis on bringing connectivity and everyday mobility together. Tata Motors claims that Altroz will shine above all its contemporaries with its agility, speed, and efficiency along with best-in-class performance and in-cabin space. Tata Motors says that the new premium hatchback will be designed for five-star safety rating.

The new pictures released by Tata Motors reveal the dual-tone interiors of Altroz. The premium hatchback will also be available in dual-tone roof options. It will have features like bold grille, dual slim headlamps and piano black ORVM. The rear door handle is placed on the C-pillar. Its cabin gets a cockpit-like theme. Also available will be a 7-inch floating touchscreen infotainment system and TFT cluster display with a new interface. 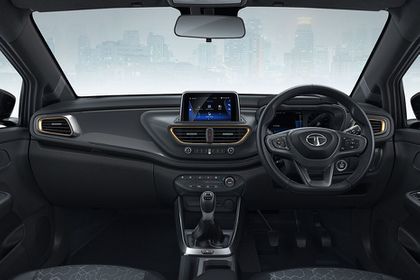